Join Barnes & Noble - Union Square on Monday, October 17th, as we welcome critically acclaimed and award-winning actor, musician, and producer Oscar Isaac, co-story writer John Alvey, and creator and co-story writer Bob Johnson to celebrate the launch of HEAD WOUNDS: SPARROW, where a crooked Louisiana detective with a higher purpose must psychically suffer the wounds of those he’s sworn to protect until he brings their assailants to justice.

**If you are not vaccinated, masks are strongly recommended.**

To make this event safe and enjoyable for all attendees, please read the below guidelines ahead of buying a ticket, so you know what to expect on the day. To avoid disappointment, we must stress that there will be no access to the event for non-ticketholders.

Please note that Eventbrite is the only authorized dealer for this event. Each person must have a ticket to enter.

Attendees can receive refunds up to 1 day before your event start date.

If you are unable to attend the event, Barnes & Noble - Union Square will hold your book for seven days after the event. Please contact the store to arrange your pickup.

Should this event be canceled due to changing COVID-19 concerns, all customers will be refunded their ticket price to the original method of payment per Eventbrite's refund policy.

Event guidelines are subject to change.

Oscar Isaac is an Award-Winning actor, producer and musician. Most recently, Isaac was nominated for a 2022 SAG and Emmy award for his role in the HBO and Hagai Levi adaption of Scenes from a Marriage. In 2016, he earned a Golden Globe for his role on the HBO miniseries Show Me A Hero as well as a Critics’ Choice nomination. In 2014, he scored an Independent Spirit Award and a Golden Globe nomination for his portrayal of the title character in the Coen Brothers’ film Inside Llewyn Davis. Past film and television credits include: A Most Violent Year (2014), Ex Machina (2015), Star Wars sequel trilogy (2015-2019), The Promise (2016), Operation Finale (2018), Triple Frontier (2019), At Eternity’s Gate (2019), The Card Counter (2021), Dune (2021), Moon Knight (2022). In 2017, Isaac headlined The Public Theater’s summer production of Hamlet with Sam Gold at the helm. Isaac appeared in Zoe Kazan’s We Live Here at Manhattan Theatre Club, as Romeo in Romeo and Juliet, and in Two Gentlemen of Verona, the latter productions for The Public Theater’s Shakespeare in the Park. It was just announced that in February 2023, Isaac, alongside Rachel Brosnahan, will star in the first major revival of Lorraine Hanberry’s The Sign in Sidney Brustein’s Window, directed by Anne Kauffman at the BAM Harvey Theater. Additional theatre credits include Beauty of the Father (Manhattan Theatre Club), Grace (MCC Theater), When It’s Cocktail Time in Cuba (Cherry Lane Theatre), Spinning into Butter (Hangar Theatre). In 2019, Isaac and his wife, writer and director Elvira Lind, created their Mad Gene Media production company. The first project under their banner, The Letter Room, was a short film written and directed by Lind and starring Isaac. It was nominated for a 2021 Academy Award.

John Alvey was born in Boynton Beach, Florida. Where he still resides with his wife, Katherine. He is a carpenter, writer, and gamer. John’s a devourer of all mediums of Fantasy and Science Fiction. He’s honored to still be creating worlds with his best friend after three decades. John is co-story writer of HEAD WOUNDS: SPARROW.

Bob Johnson is addicted to words: stories, lyrics, poetry, comics, and screenplays; anything readable or writable. Boynton Beach, Florida is his birthplace. He currently resides in Boca Raton with Ona, the greatest person he’s ever known. He enjoys playing Make Believe with his best friend, John. Bob also tries to get host in the woods whenever time and weather permit. He’s a cancer survivor and a decent drywall finisher. He is the creator and co-story writer of HEAD WOUNDS: SPARROW.

No one would call Leo a good person – much less a good cop. But when his best friend is shot in front of him, he wakes up with a hole in his own head that only he can see, and a host of mysterious strangers calling on him for action.

Most people go about their daily lives ignoring or unable to see the divine battle for Good and Evil raging around them, but it has just become very very real for Leo. As angels and demons vie for the fate of humanity, he must choose a side or risk seeing everyone and everything he has ever known destroyed as the stakes get higher and higher.

As Leo sees the true faces of the people around him he must decide – will he do what’s best for him alone, or follow a higher purpose? 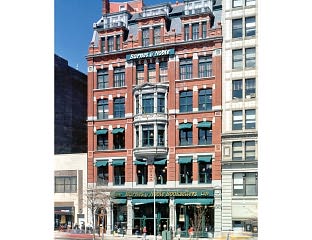